From
Jump to navigation Jump to search

Sif is a terrestrial planet in the Vir system. It is somewhat earth-like, in that it has oceans, a breathable atmosphere, a magnetic field, weather, and similar gravity to Earth. It is currently the capital planet of Vir. Its center of government is the equatorial city and site of first settlement, New Reykjavik.

The aptly named Vir Governmental Authority is the sole governing administration for the Vir system, based out of New Reykjavik on Sif. It is a representative democratic government, and a fully recognised member of the Confederation.

Corporate entities such as NanoTrasen which operate on Sif, in Vir space, or on other bodies in the Vir system must all comply with legislation as determined by the VGA and SolGov. As a result, any serious criminal offences, industrial accidents, or concerning events should be forwarded to the VGA in the event that assistance or communication is required from the Vir Police, Vir Defence Force, Vir Interior Ministry, or other important groups.

Sif has one main continent, and one massive ocean. The planet is approximately 77% water. On the continent, an abundance of hills, ice, and snow are present, which presented a challenge for colonial settlers. The temperature at the equator is on average a chilly but habitable 11 degrees Celsius (~52 Fahrenheit). 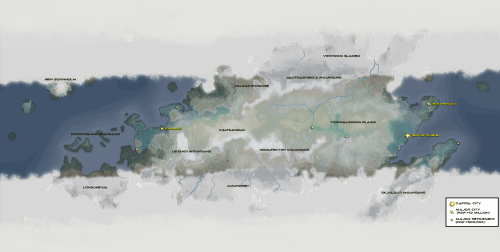